When Will the Radbahn Be Built?

A 500-meter section of the Radbahn is expected to be ready for use in late summer 2022. Unfortunately, we cannot yet make a binding statement regarding the completion of the entire route, which will run from the Oberbaumbrücke in Kreuzburg to Bahnhof Zoo in Charlottenburg. The realization depends on planning and approval phases in the area of traffic and urban planning as well as on political will and can take a very long time.

What Is the Radbahn? 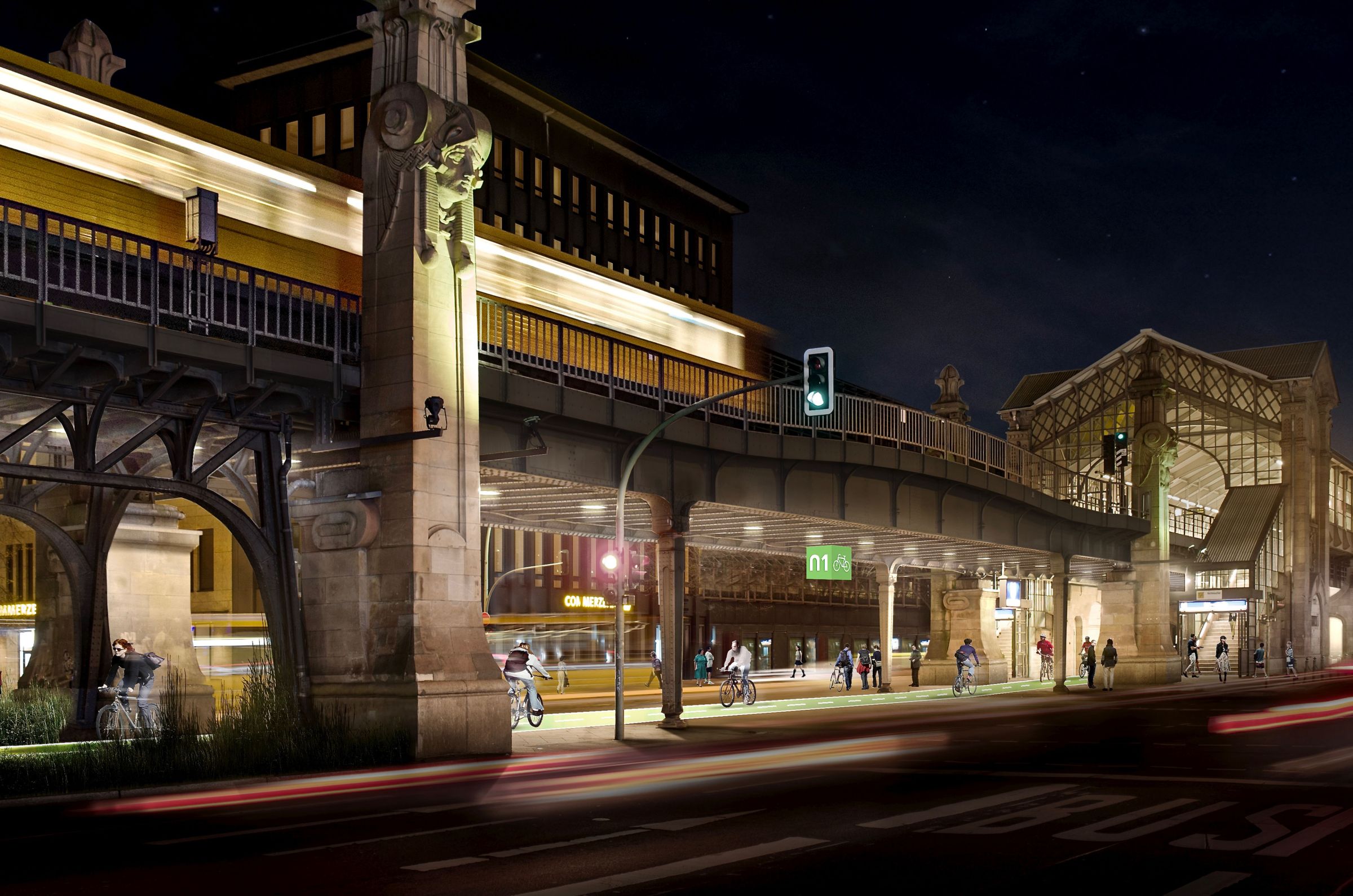 The concept of the Radbahn pursues the idea of an urban development with bicycle infrastructure under and along the largely forgotten space of the listed elevated viaduct of Berlin's subway line 1.

A City For People

Cities are places of ongoing change, where new and different perspectives are constantly mixing. As such, cities are suitable laboratories for pioneering innovations. But in the modern era, the pursuit of technological progress has led to alienation from our environment, our fellow human beings and even ourselves. 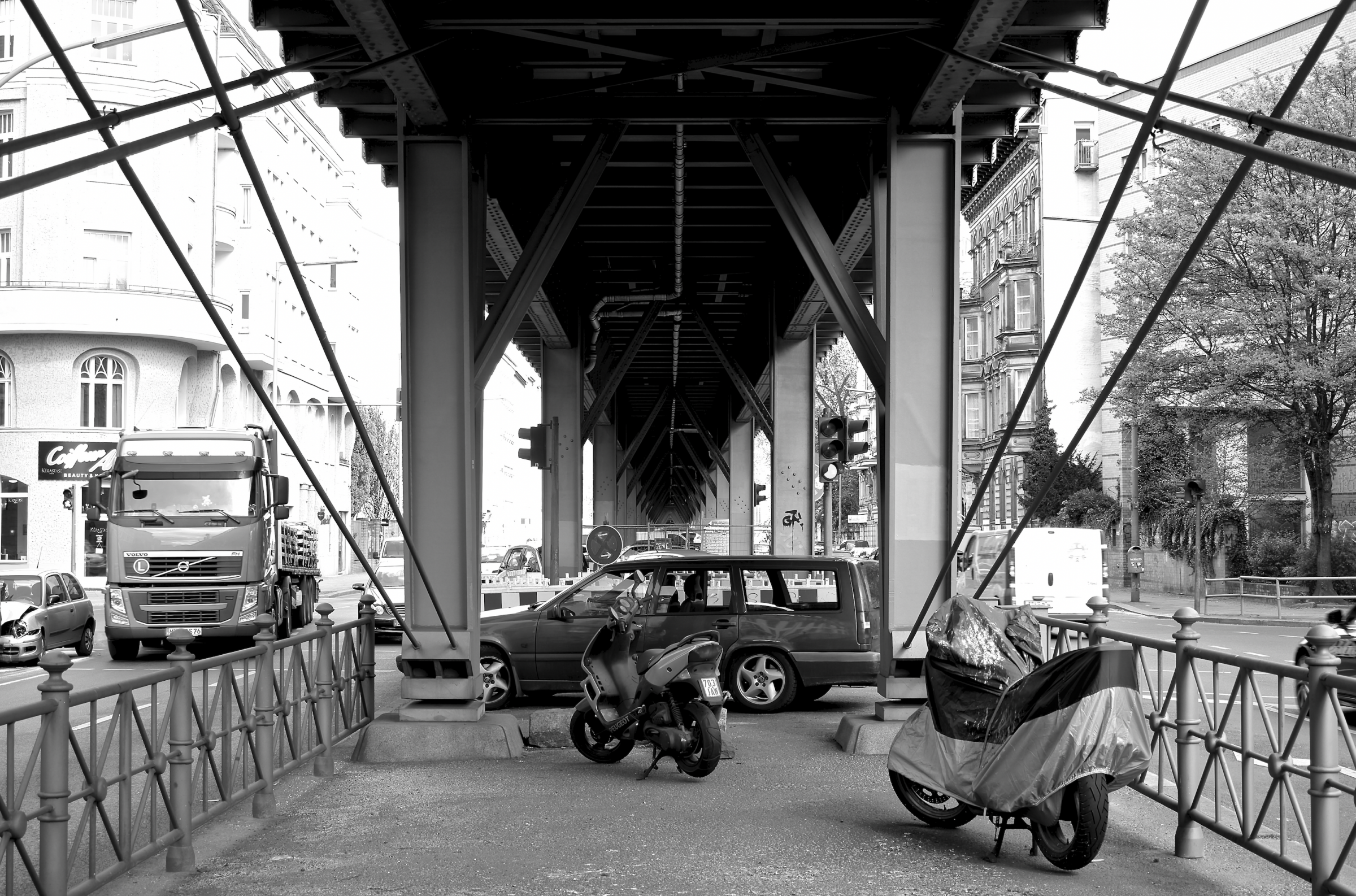 This is particularly evident in our cities. Public space can become a place of isolation: We often navigate the streets in cars or whiz past our fellow human beings on scooters or bicycles. As a result, chance encounters and conversations rarely occur anymore.
In view of the human need to interact with others and share common experiences, there is a need for a more conscious form of mobility that breaks the current status quo, i.e. the prevalence of cars and the tendency towards self-isolation in public spaces.

A Bike Park – Bridging the Gap Between Traffic and Urban Development 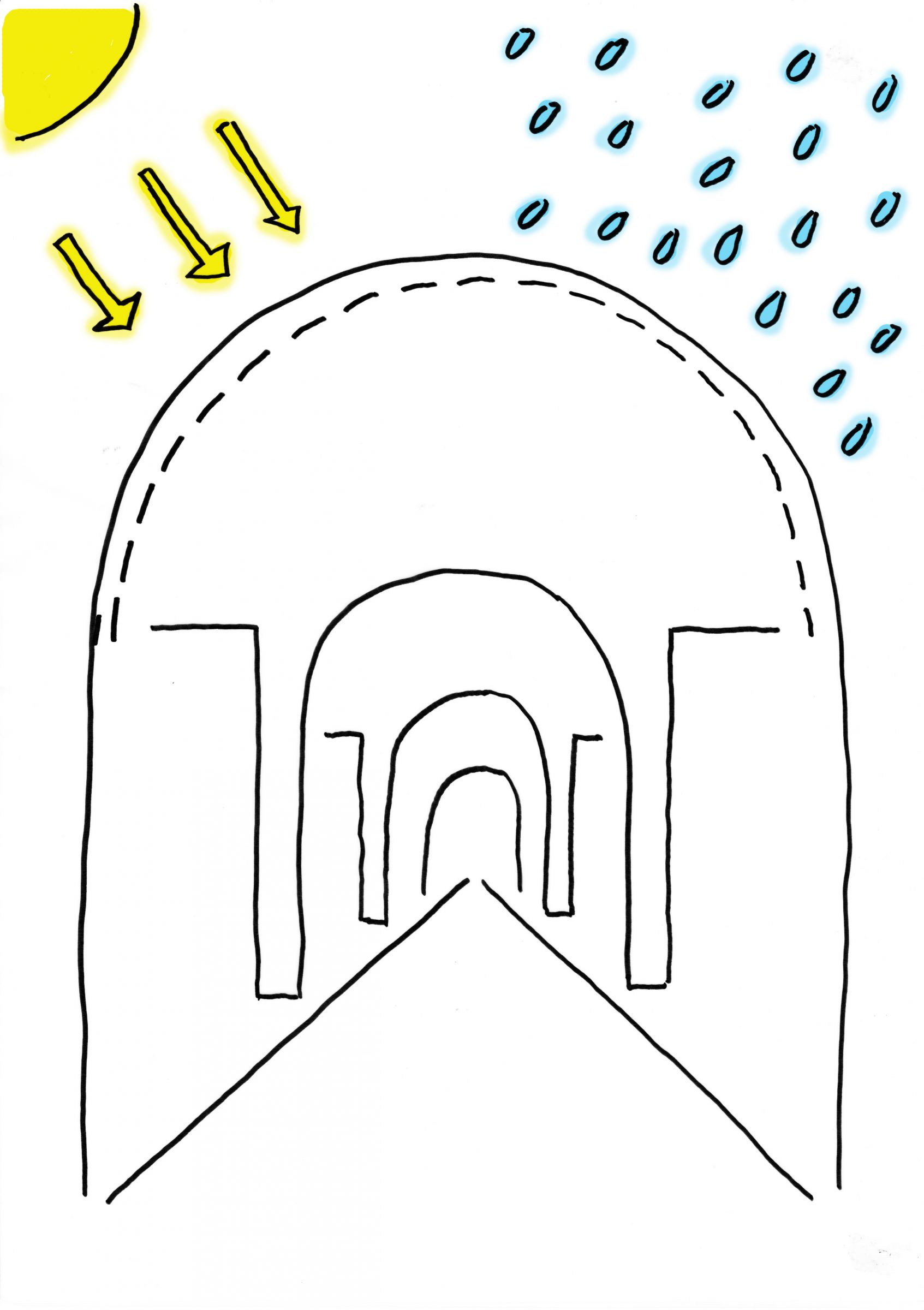 Not "just" a bike path

The Radbahn vision was developed in 2014. It grew out of an idea to breathe new life into the largely forgotten space under the elevated railway viaduct of Berlin’s U1 subway line, which is protected as a historic monument. Against the backdrop of urgent urban challenges such as the need for a transition to more sustainable forms of transport and more sustainable urban development, this space is to be re-imagined so that it can be experienced in a whole new way

Protected from wind and weather, an approximately nine-kilometer-long bike path will run partly under and partly alongside the elevated subway line, from Bahnhof Zoo in the west of the city to the Oberbaumbrücke in the east. Here, young and old will be able to ride safely through three Berlin districts and explore their characteristics, while being separated from all other traffic for most of the way. The Radbahn, contrary to its name, is not “just” a bike path, but an urban space that can be experienced in many ways and that addresses the different needs of many citizens. 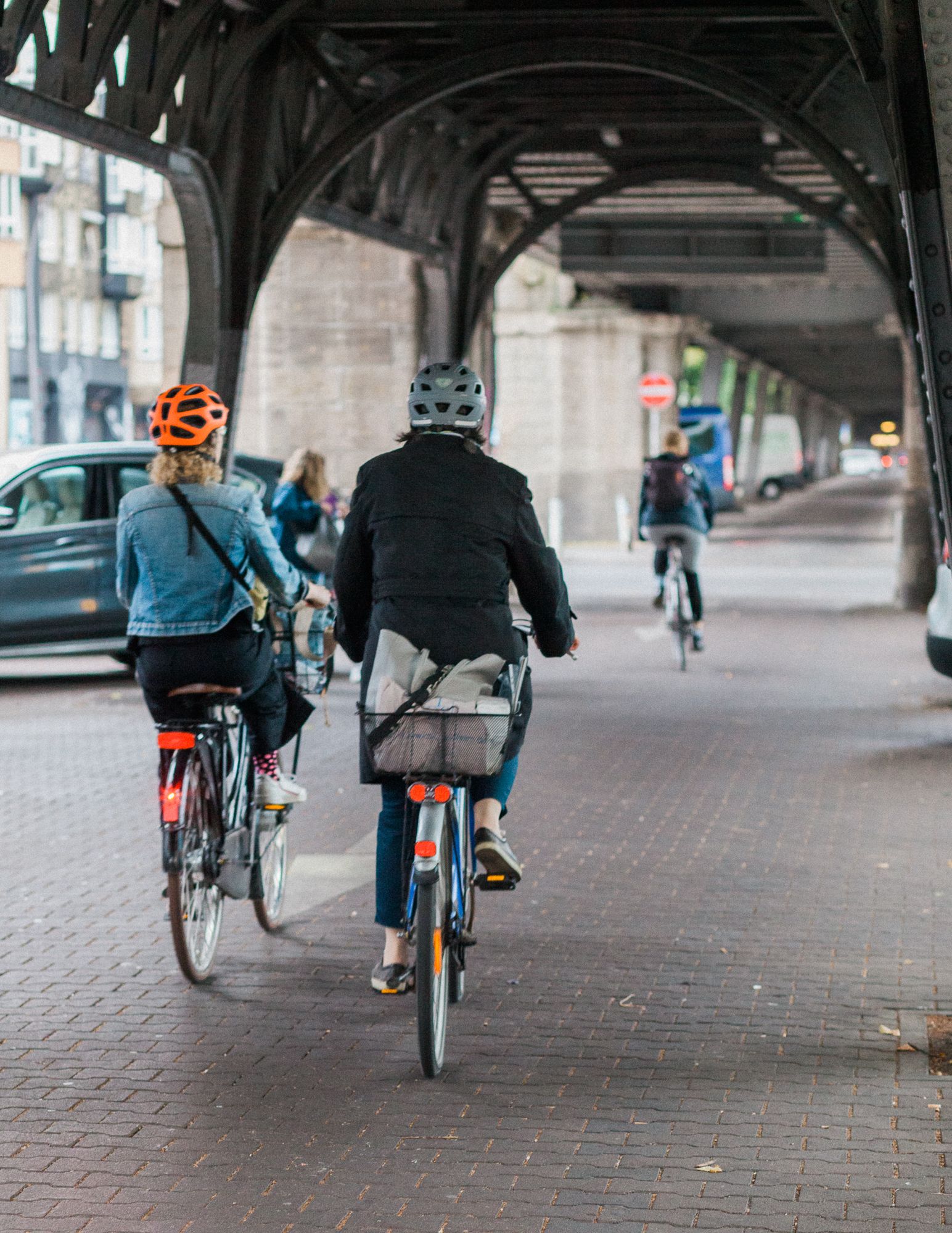 Space of encounter and movement

For us, the Radbahn is a place of encounter and movement: a bike park. Parks do not correspond to a rigid spatial concept but instead allow for a variety of uses and social activities. They serve as a testing ground for social coexistence and create a place to breathe in the often-chaotic rush of city life. Along the Radbahn, people should feel a sense of deceleration and be able to enjoy themselves while moving through the hustle and bustle. Those who only want to rush from A to B miss out on consciously perceiving of their own surroundings and fellow human beings. Or as the philosopher Khalil Gibran says, “Tortoises can tell you more about the road than hares.”

Since 2019, the project has been developed further as "Reallabor Radbahn" and is about to be taken off the paper and put onto the road.

The idea of cycling underneath the U1’s elevated railway viaduct has certainly been on the minds of several Berliners before us. Our Finnish friend Martti Mela, however, gathered together a few architects, urban enthusiasts and cultural workers who sketched out the idea to make it more concrete and finally published it on social media in November 2015.

The idea was launched at just the right time! There was a flood of interest from cyclists, the media and politicians: The concept attracted 10,000 Facebook fans within just two weeks, generated media articles all over the world and won the German Federal Ecodesign Award.

The House of Representatives in Berlin also took note and commissioned a feasibility study—albeit on bicycle highways, a category into which the Radbahn does not fit and for which it was never designed. By definition, bicycle highways in Germany must have a minimum width of four meters and run largely without intersections. The Radbahn averages three meters and, as an inner-city route, has many more intersections than suburban routes do. Consequently, it was not surprising when the Radbahn failed to meet all the criteria of the feasibility study. However, the study did attest to the special role the Radbahn could play as a connecting route between several urban districts that could be linked to existing bicycle highways coming from the periphery.

In addition to the Radbahn’s enormous potential for Berlin’s mobility system, we also decided to explore its potential impact on the economy, urban development and culture, and compiled our findings in the book Radbahn Berlin: Future Visions for the Ecomobile City, which was published in 2017.

The Organization Behind It All: paper planes e.V.

The team behind the Radbahn established a legal form for itself in the summer of 2016: paper planes e.V. The aim of the non-profit organization is to explore social and technological ideas that lead to urban spaces which are more environmentally and human friendly and thus more livable.

paper planes believes that increasing urbanization presents a great opportunity. If we humans manage to make the right investments in our cities, we can succeed not only in making our daily surroundings more livable, but also in addressing massive global challenges.

Our ‘paper planes’ are designed to inspire as many people as possible about the exciting opportunities of tomorrow. To make it happen, we develop concrete concepts, carry out comprehensive project planning and promote our ideas with convincing communication.

In the book, initial recommendations for implementation of the Radbahn are developed and traffic questions related to technicalities of traffic planning are answered. With this, the Radbahn was no longer a utopia. The book paved the way to concrete planning.

Where can I get the book?

The entire book is available in bookstores or at jovis.de (also in English).

Thanks to the great commitment of the founders of paper planes e.V., the Radbahn became a concrete project and its first key achievement was the production of the Radbahn book.

With the help of a successful crowdfunding campaign and the participation of many experts, the 140-page book Radbahn Berlin: Future Visions for the Ecomobile City was created. It features details about the feasibility of the Radbahn and recommendations regarding its implementation. The 2017 publication was the first step towards transforming the Radbahn from “just an idea” dreamt up by a team of committed people into a concrete and feasible project supported by a steadily growing coalition of different groups of actors who want to break new ground and create a livable urban future.

Browse through the book

In concrete terms, the book offers initial ideas for the implementation of the project as well as numerous answers to questions of traffic planning, such as how to deal with intersections, elevated subway station entrances and exits, or insufficient distance between the viaduct pillars. It also provides inspiration and suggestions about how the economy, mobility and coexistence can be made more sustainable in the Berlin of the future. The book makes it very clear that the Radbahn is much more than an ordinary bike path. Above and beyond its traffic solutions, this innovative infrastructure also offers enormous social opportunities for a growing Berlin.

Follow the linke to read the individual chapters of the book radbahn.berlin/book.

The entire book is available in bookstores or at jovis.de.